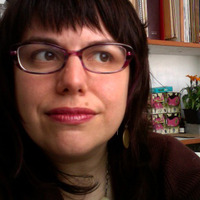 Kristin Rogers Brown is an art director and graphic designer who has worked in a wide variety of environments, from small studio to corporate in-house design to publishing. She joined Bitch Media as art director in March, 2010.

Though her first love in design is print, she loves finding the right media for the message, and believes in keeping a balance of intelligence, function, and fun in all the details of her work, whether it’s brand development, packaging, identity, or web design. In addition to designing Bitch, Rogers Brown is a freelance art director, and served on the board of AIGA Portland from 2004 to 2011, finishing her term as vice president.

She has worked with sustainable design initiatives for a variety of clients (including a long-time stint as creative director for The Bear Deluxe magazine), and has been instrumental in working with AIGA Portland’s sustainability team (established in 2008) and Worldstudio’s Urban Forest Project.