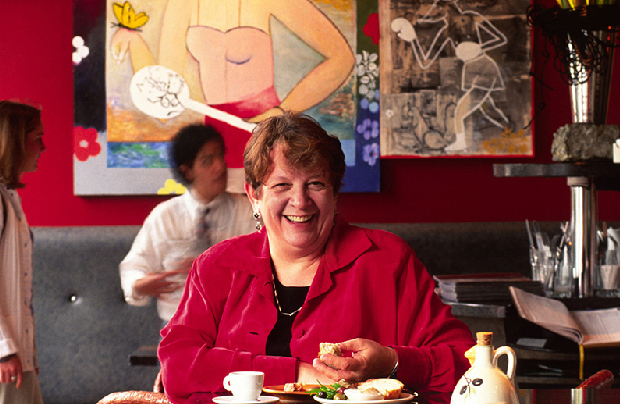 PNCA's Laura Russo Luminary Alumni Award recognizes PNCA alumni who exemplify PNCA's mission, and celebrates the broad spectrum of traditional and non-traditional paths to alumni excellence. Laura Russo, PNCA alumna '75 and beloved local gallery owner, was an unparalleled figure in Portland's creative community. She left a legacy of outstanding artistic achievement in her lifelong commitment to the arts in Portland, and was a great supporter of PNCA.

Nominees should be graduates of PNCA and role models who stand out from their peers through some combination of excellence, impact, innovation, and integrity. They may be either well-known or not yet widely recognized for their achievements.

2011: Laura Russo ’75 for her contributions to the Portland arts community.

2013: George Johanson ‘50 for his lifelong commitment to the arts and to nurturing students’ creative development.

2021: Anthony Hudson ‘13 for his insightful and creative endeavors and commitment to question and redefine sensibilities.

2021: Ellen McFadden ‘49 for her outstanding work and lifelong commitment to graphic design and the instruction of art.

2021: Lucinda Parker ‘66 for her originality in painting abstraction and continued devotion to nature and the Northwest aesthetic.

2021: Arvie Smith ‘86 for his outstanding artistic practice within the local community and beyond.